The Oto chair, which has been named a national winner at this year's James Dyson Awards, has already been tested in the child psychiatry centre of the University Hospital of Tours.

Graduate designer Alexia Audrain has developed a chair with cocooning, inflatable walls that helps people with autism self-soothe when they are experiencing sensory overload.

Designed to emulate the feeling of being embraced, the Oto chair and its accompanying footrest squeeze the chest and legs via blow-up modules similar to those of a blood pressure monitor. 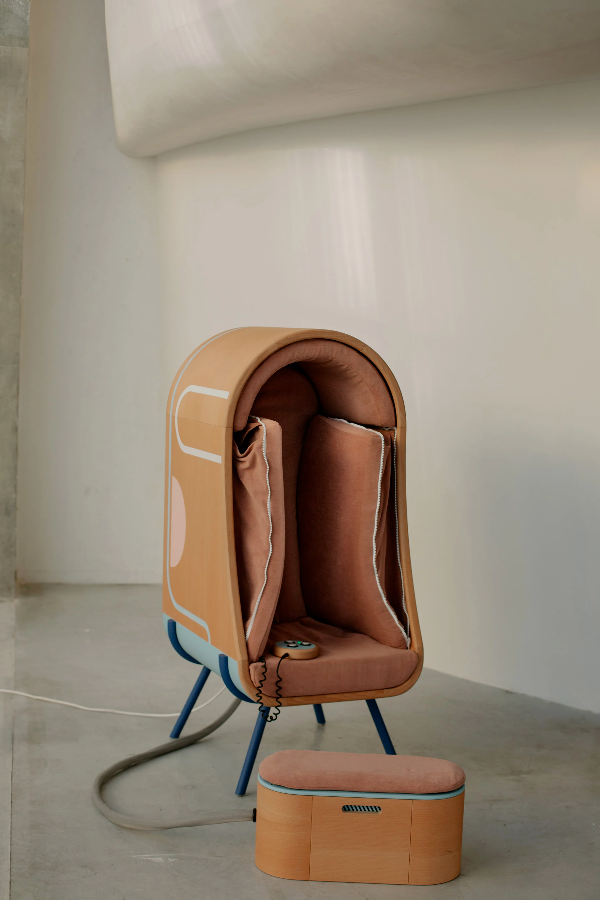 The Oto chair features inflatable walls that hug the user

This kind of deep pressure therapy has proven beneficial for people with autism, who can struggle with processing sensory information such as noise, light or physical contact, by helping them focus on the limits of their own body.

Normally, this requires help from another person by being tightly held, hugged or pinned to the ground. But with the Oto chair, Audrain hopes to introduce a sense of agency and dignity into the process. 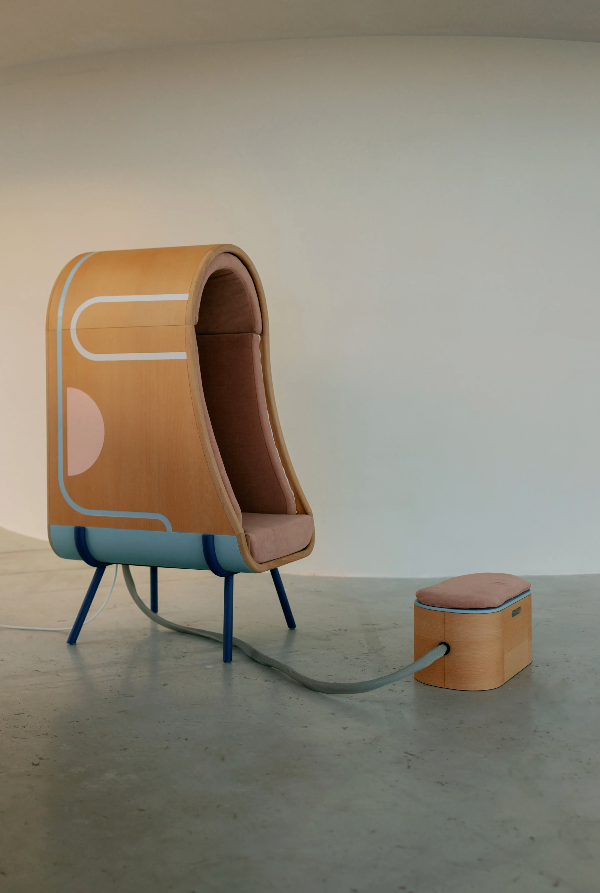 A corresponding footrest applies pressure to the legs

"The aim of the chair is to allow as many people as possible to use it autonomously, in order to meet their own sensory needs," she told Dezeen.

"The hug should not be applied as in a restraint device or in psychiatric shock treatment. The user is in a seated position to remain in control of their body and open to the environment so that the hug is a choice." 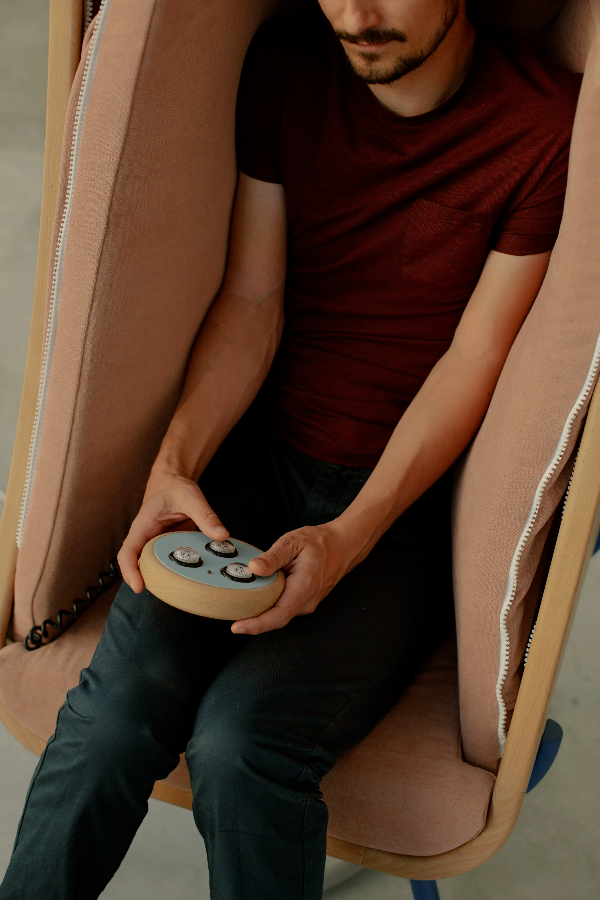 The walls can be inflated and deflated using a remote

The blow-up modules at the heart of the hugging mechanism can be inflated and deflated via remote control or tablet, which allows users to fine-tune the pressure level.

Unlike the weighted blankets or vests that are sometimes used to administer deep pressure therapy, this system applies active rather than passive compression and thus provides more effective relief, Audrain said. 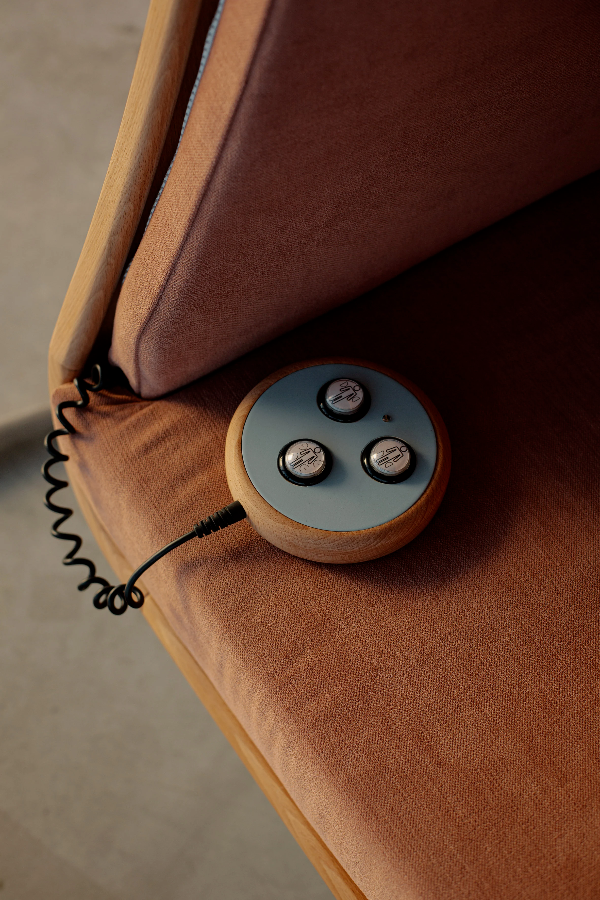 Pictograms make the remote control easy to use

Housed within a beech wood shell, the chair's plush interior is padded out with sound-absorbing upholstery foam and fabric, while distracting details such as zippers are hidden away, turning the design into a makeshift sensory deprivation chamber.

"The cocoon shape and the upholstery provide muffled acoustics that help users to concentrate on their senses and on their body while keeping them isolated from other stimuli," said Audrain.

"In the first version, there was also a zipper on the cushion. But for some autistic people, it was really too tempting to touch it and play with it, which would have disturbed the feeling of pressure on their body."

Audrain created the prototype chair during her degree at L'École de design Nantes Atlantique based on user feedback from people with autism and psychometricians studying sensory processing disorders.

Based on this input and her training in carpentry, Audrain envisioned the chair to look more like a piece of design than traditional "hug machines", deep-pressure devices and other medical aids. 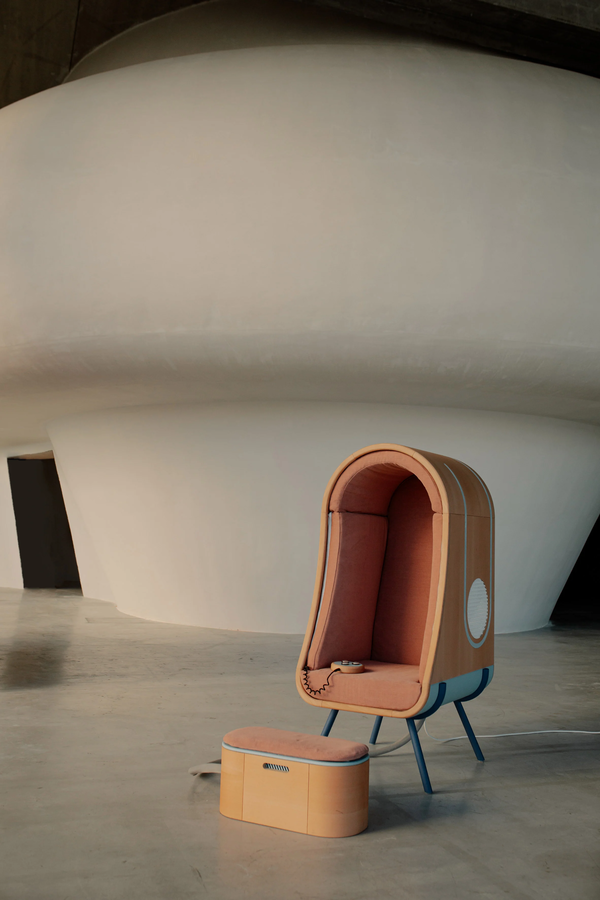 "Users, families and the medical teams confirm that it is important to have access to beautiful and non-stigmatising therapeutic furniture to contribute to the soothing effect that it provides," the designer explained.

"I have used beech as it is a type of wood common in French forests unlike much medical furniture, which is made from plastic," she continued.

"Moving away from the aesthetics of medical furniture is important because it could facilitate the inclusion of autistic people in different public and private environments."

The Oto chair, which has been named a national winner at this year's James Dyson Awards, has already been tested in the child psychiatry centre of the University Hospital of Tours.

And starting in October, Audrain hopes to trial five of the chairs in different settings while working to make the manufacturing process more affordable, with the aim of commercialising the design within the next year.

Photography is by Coralie Monnet.